The falcon drone bird is a remote control robotic bird of prey. It has the realistic appearance and weight of its living counterpart. The falcon drone bird is an ornithopter, which means it flies by flapping its wings as a means of lift and propulsion. It has a flight performance comparable and indistinguishable to a real peregrine falcon. Through the combination of realistic silhouette and carefully mimicked flight behavior, other birds think the falcon bird is a real predator. Because of these characteristics, the falcon drone bird is one of the most safe, humane, effective forms of bird control. It is the perfect tool for airport bird control and many other bird-related problems. Continue reading to learn more!

Inspiration for The Drone Bird Company

The Drone Bird Company mimics nature, and its developers drew inspiration from ornithology, falconry, and model aviation. By studying the motion and behavior of birds, and combining technical expertise, our engineers produced a true-to-nature robotic bird. The Engineering Fluid Dynamics research group from the University of Twente provided research into aerodynamic properties. The Robotics and Mechatronics group helped to improve flight performance and safety using advanced autopilot software and hardware.

The Drone Bird Company offers new possibilities in the field of bird control, because of its base in nature itself. By triggering the instinct of birds through the combination of silhouette and wing movement, chasing birds becomes fully controllable. The person on the ground is in control of what happens in the air. We offer custom made solutions for airport bird control, oil & gas, construction & dredging, and more.

The peregrine falcon design is ideal because the falcon is a predator that hunts birds from higher altitudes in open areas like airports. Other predators like buzzards or hawks hunt lower to the ground for rodents, and pose a much lower threat to bird prey. It is also first choice among designs because falcons are the most widely recognized bird of prey on earth, and there are different varieties of the raptor on every continent. This feature makes it versatile enough to conduct operations anywhere.

The company consider all aspects of bird psychology in addition to appearance during the process of designing the falcon drone bird. The form of the current model relies on the understanding that birds have a keen cognitive ability. They learn to make distinctions between ‘same’ and ‘different’, i.e. AA same as BB but different from AB. They can learn and identify ‘harmful’ and ‘safe’, recognize objects and situations and ‘cause and effect’, share experiences, and have an outstanding memory. Because of these characteristics, most other bird hazing tools only work for a short time before birds habituate.

The most consistently effective bird hazing tool is a bird’s own natural enemy. When confronted with prey, they respond to two things: the silhouette and behavioral pattern. Birds can tell when the predator is hunting by the wing beat frequency. Alternating frequencies tells birds how aggressive the predator is. By combining lifelike wing beat frequencies and silhouette, our designers show birds cannot make the distinction between a real predator and the falcon drone bird. This UAV now flies in several countries and climates, hazing various bird species, and there is no observed habituation.

As opposed to traditional falconry, the falcon drone bird does not need food, shelter, and training. It hunts any time, whenever necessary, and the pilot can change batteries rapidly when necessary. The falcon drone bird will always come back to the pilot, and thus reduces risk. It can be used alone, or alongside traditional falconry and other methods. Engineers equip each unit with safety measures, and test each one extensively, so they can assure they will not pose a hazard.

Birds cannot distinguish between real predators and the falcon drone bird. Each type of bird reacts to the falcon drone bird in their own way. Their reaction depends on what activity they are in, such as loafing on water, perching in trees, aerial displaying, feeding on ground, etc. Current circumstances at time of interaction also play a role in how birds respond. The drone bird is also effective on larger species like geese, pelicans, cormorants, resident and migratory birds, and even other birds of prey.

Over several years, The Drone Bird Company team and partners tracked bird populations and bird strikes at each project. This allows for an analysis of changing bird populations, and gauging reactions of different bird species in different activities. Data suggests in most cases the drone bird is a highly safe, humane, and effective bird control, and birds do not habituate. This is likely due to the randomized, erratic, and aggressive nature of the techniques pilots use.

A common response when confronted with predators is for birds to gain altitude, and try to out-climb the predator. The drone bird can be used to herd broken flocks or swarming birds together. Often pilots fly around the flock and vector them in the direction of choice, and out of harm’s way. What’s more, The drone bird can change the flight path of migrating birds like geese. It intercepts them mid-flight, and pushes them away from the flight path of aircraft taking off or coming in to land.

With aggressive and consistent flight in a target location, the drone bird begins to reduce bird populations in those focus areas. In these and other instances, The Drone Bird Company field teams also use other wildlife management tools to reinforce the effect, such as pyrotechnics, long range acoustic hailing devices, and green lasers. After a few weeks birds begin to associate the location as high risk, and begin to stay away. Given the opportunity to work for an extended period in an area, birds begin nesting, feeding, and loafing elsewhere.

Safety at a Glance

To operate the drone bird safely, the company requires regular maintenance after a certain number of flight hours or flights. It is also a requirement that pilots never fly beyond visual line of sight. Most importantly, the drone bird is equipped with internal fail-safes that prevent the tool from becoming a hazard.

A geocage is airspace defined by GPS locations with hight and distance limitations. If the drone bird hits the geocage, it will fly back automatically to the home position, and start circling overhead. At this point the pilot can take back control and continue their operation.

When the battery of the drone bird reaches its minimum charge level the pilot will receive a warning signal. This first warning means that he has to prepare for landing. Later there is a second warning, similar to a stick shaker in manned aviation. This time the pilot must land immediately.

In the event that all systems fail, the power supply of the drone bird is cut. When this happens, the wings stop flapping and freeze in the upward position, losing lift. The drone bird then spirals down preventing a fly-away situation.

Who is in charge?

In the workshop, R&D Engineers ensure top quality construction, materials, and failsafe functions. In the field, pilots are required to complete checklist to verify each unit is in flying condition and properly calibrated.

Field teams typically consist of a Pilot-in-Command (PIC) and an observer. The PIC will have the appropriate certification or will fly under the supervision of another PIC with certification. The Drone Bird Company and partners all adhere to local regulations, and clients must comply with the rules in order to fly.

When do pilots not fly?

There are two factors that will prevent a pilot from flying: when there are adverse weather and surroundings, or when the pilot is not fit for flying.

When there is heavy precipitation, winds greater than 20 kts, or visibility is less than 3 statute miles, pilots will not fly. This is to avoid the increase in risk for manned aviation, and damaging equipment or property. Under these conditions pilots use secondary methods to remove birds.

The company holds pilots to the same standard as manned aviation in terms of fitness to perform duties. We assure they are mentally and physically fit and prepared ahead of time. There has not been a case of an unfit pilot to date.

What are the procedures?

Long before an operation begins, pilots complete a falcon drone bird training program. Before flying commences, the organization verifies that regulations are met, and certifications obtained. If operating at an airport, stakeholders must approve or be aware such operations will take place. Stakeholders include wildlife management and operations teams, air traffic control (ATC), the local aviation authority, etc. Full compliance may take a month or more to achieve in Europe and North America.

Daily operations require a check-in with ATC and wildlife management team, and security if necessary. Regardless of the type of operation, it is strongly recommended to file a notice to airmen (NOTAM), review NOTAMs daily, and monitor the radio for low-flying air traffic and warnings.

Why have so many redundancies?

Still have questions about the most safe, humane, and effective bird control on the market?

Contact us at info@thedronebird.com, or submit your inquiry here. 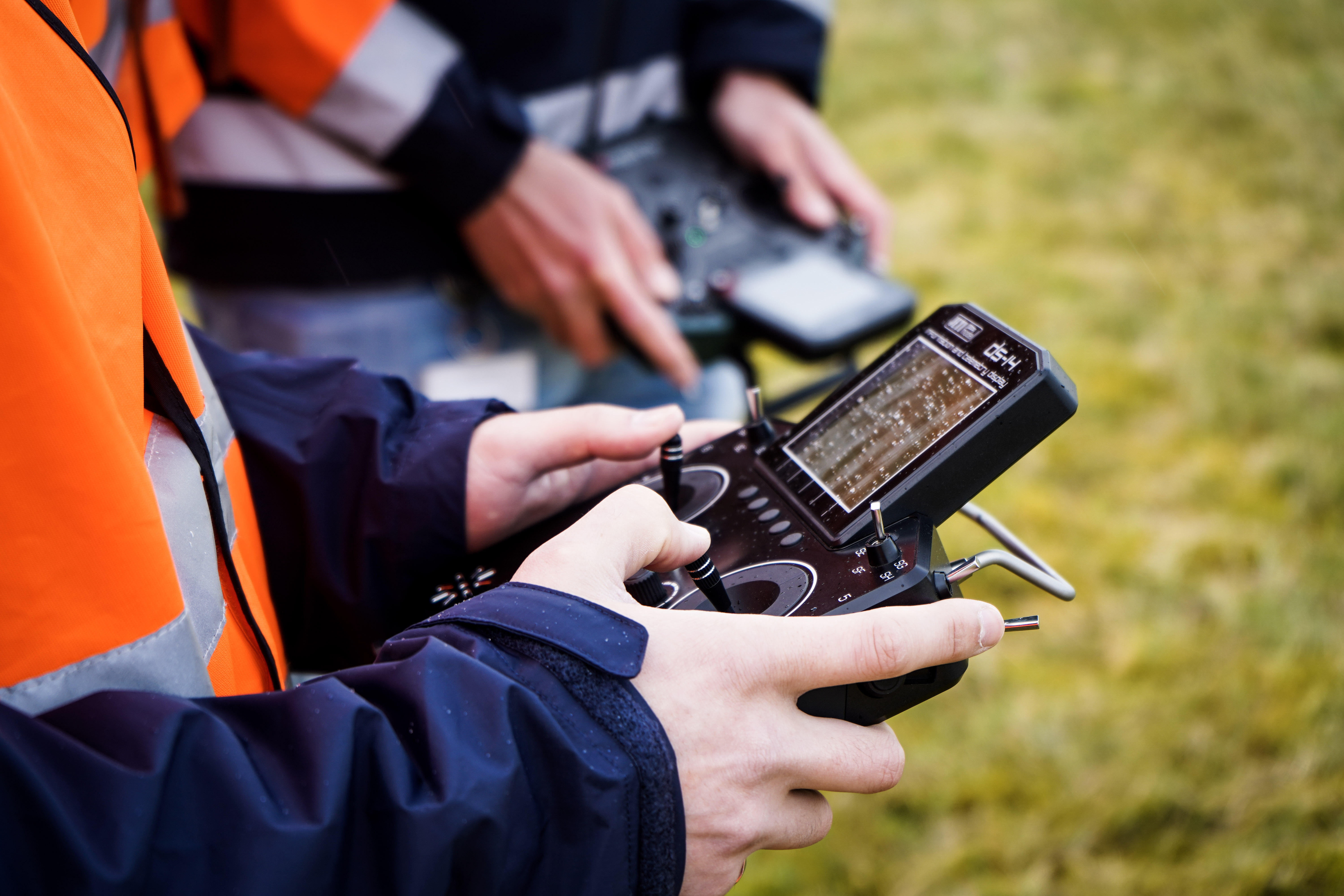