Nesting birds on islands created by dredging can prevent operations from continuing. One company working in the Prorva Marine Channel in Kazakhstan contacted The Drone Bird Company company for help. The goal of the project was to use out bird drone to reduce  nesting to so it would not inhibit work. With tireless, speedy work, and close monitoring, the falcon drone bird reduced nesting by 75% -83%. Continue reading to learn more. 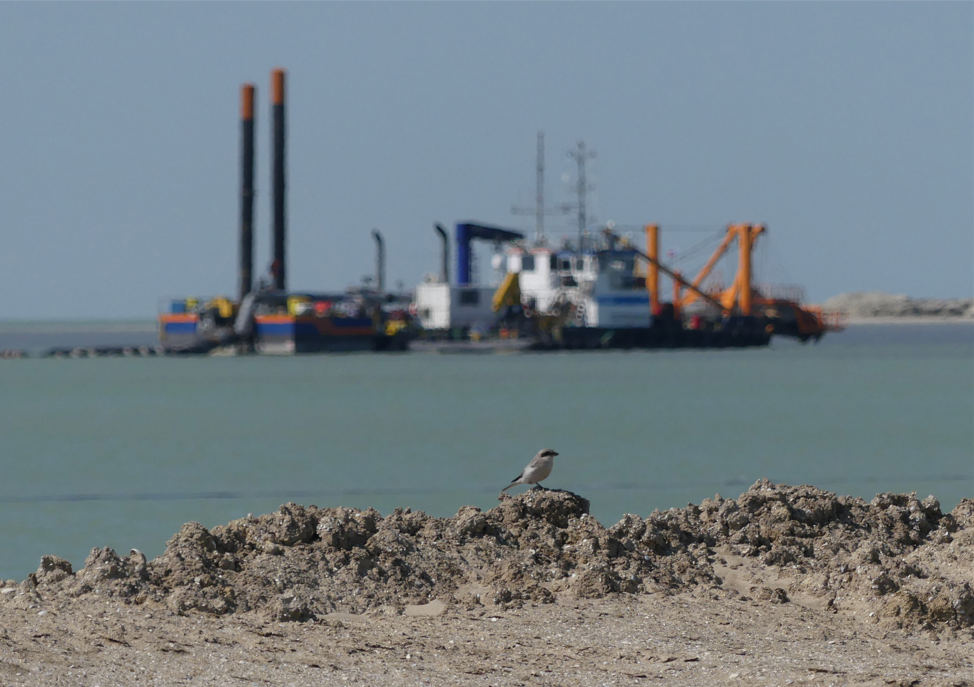 In 2017 in the eastern Caspian Sea, a company was dredging a channel 68 kilometers long. They disposed of dredged material on 32 artificial islands, 16 of them submerged, and 16 above water. These islands were a suitable habitat for all sorts of animals, from small insects to seals, and varying bird species. The Caspian Sea is on the major migratory routes for many bird species. Tens of millions of birds pass over the area of the northern, northeastern, and eastern coast, twice per year. Hundreds of thousands of birds breed in the area, and many birds choose to stay for the winter. For these reasons, it is one of the most important regions for the Eurasian birdlife ecosystem.

After a successful operation during the 2016 season, The Drone Bird Company returned for the 2017 season to continue the bird control operation. The goal was to minimize the impact on the dredging operation caused by breeding birds. Two field teams and an ornithologist were then active from the start of the dredging in April until the end of August.

The resident specialist and The Drone Bird Company team used a four-step approach to wildlife management. This methodology included survey, strategy, active operations, and monitoring/adapting to local results and circumstances. The equipment for the project exists of the falcon drone bird, automated and manual green lasers, and long-range acoustic devices. Sticks with streamers and human disturbance also added further support. Furthermore, as part of habitat management, there were six buffer islands for birds to populate. The client also took measures to flatten out attractive places like spill piles next to smaller access channels. The buffer islands were Exclusion Zones for human activity. The field team and Marine Mammal Observers (MMO) were careful not to disturb the bird populations.

The 2017 season saw a sharp increase in biodiversity and populations compared with 2016. Specialists identified 178 bird species during the project compared — more than the 108 in 2016, of which 13 were potential breeders. 11 species bred at the Prorva site: Caspian gull, Pallas’s Gull, Slender-billed Gull, Common Tern, Caspian Tern, Sandwich Tern, Little Tern, Gull-billed Tern, Kentish Plover, one pair of Common Shelducks, and one pair of Collared Pratincole. The first nine were the dominant species together with the Black-headed Gull. Multiple species in the area are on the International Union for Conservation of Nature Red List of Threatened Species.

The operation was highly challenging, but successful. The impact on the dredging operation came to an absolute minimum. Nesting outside of small Exclusion Zones was often prevented, so that dredging could continue as normal. There was one occasion of a temporary decrease in production because of an unexpected nest in danger of being damaged. Also, at one island there was a speed reduction rule in place in the channel to prevent disturbance of a small colony on spoil piles.

The 2017 season saw highly integrated involvement of bird control, leading to success despite an enormous increase in populations and breeding. Extensive preparations early during the year led to a well-communicated approach and clear procedures on-site. Fast transport around the Prorva site further meant the field team could be there when necessary. A well-defined division of responsibilities between the MMO and bird control unit led to clarity and ability for both parties to support each other. Client personnel on the islands assisted at critical times during the season when creating disturbance and minimizing attractive nesting locations. Therefore, the 2017 operation went exceedingly well, and was highly successful.

Within the Exclusion Zone consisting of 6 islands, the team observed or estimated between 2,300 – 3,000 nests. These were minimum estimates, as the Exclusion Zone was only monitored a few times. It is highly likely the actual numbers were much higher. Within the active area consisting of 10 islands, specialists observed between 840 – 990 nests. This means the falcon drone bird reduced nesting to an effectiveness on a per island basis of between 75% – 83%.

If your organization requires wildlife management, its important to begin planning early. To arrange for a field team to service your operation, or to lease or purchase drone birds, or train your own pilots, please send your inquiry to info@thedronebird.com. You may also submit an inquiry here. 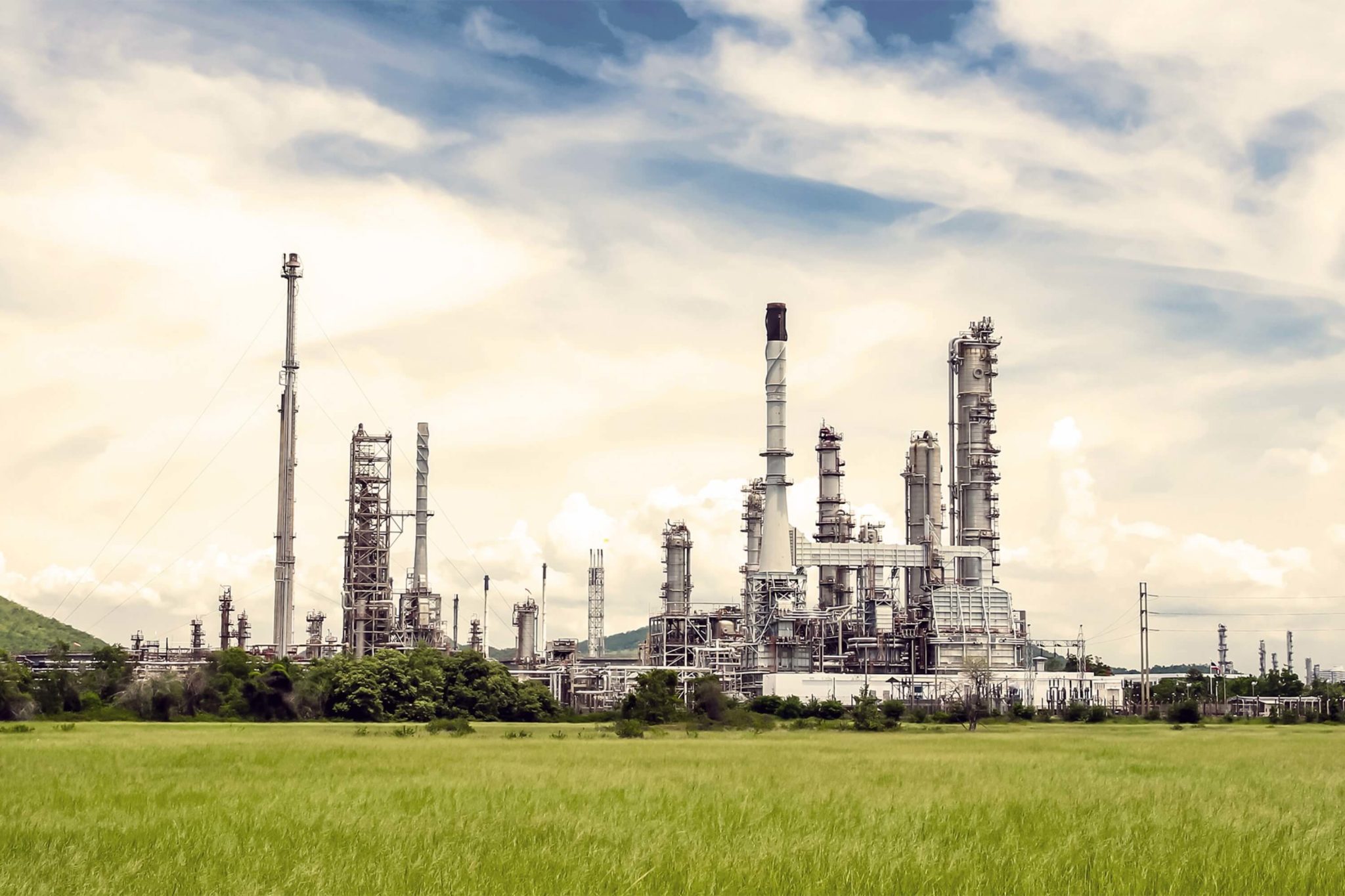 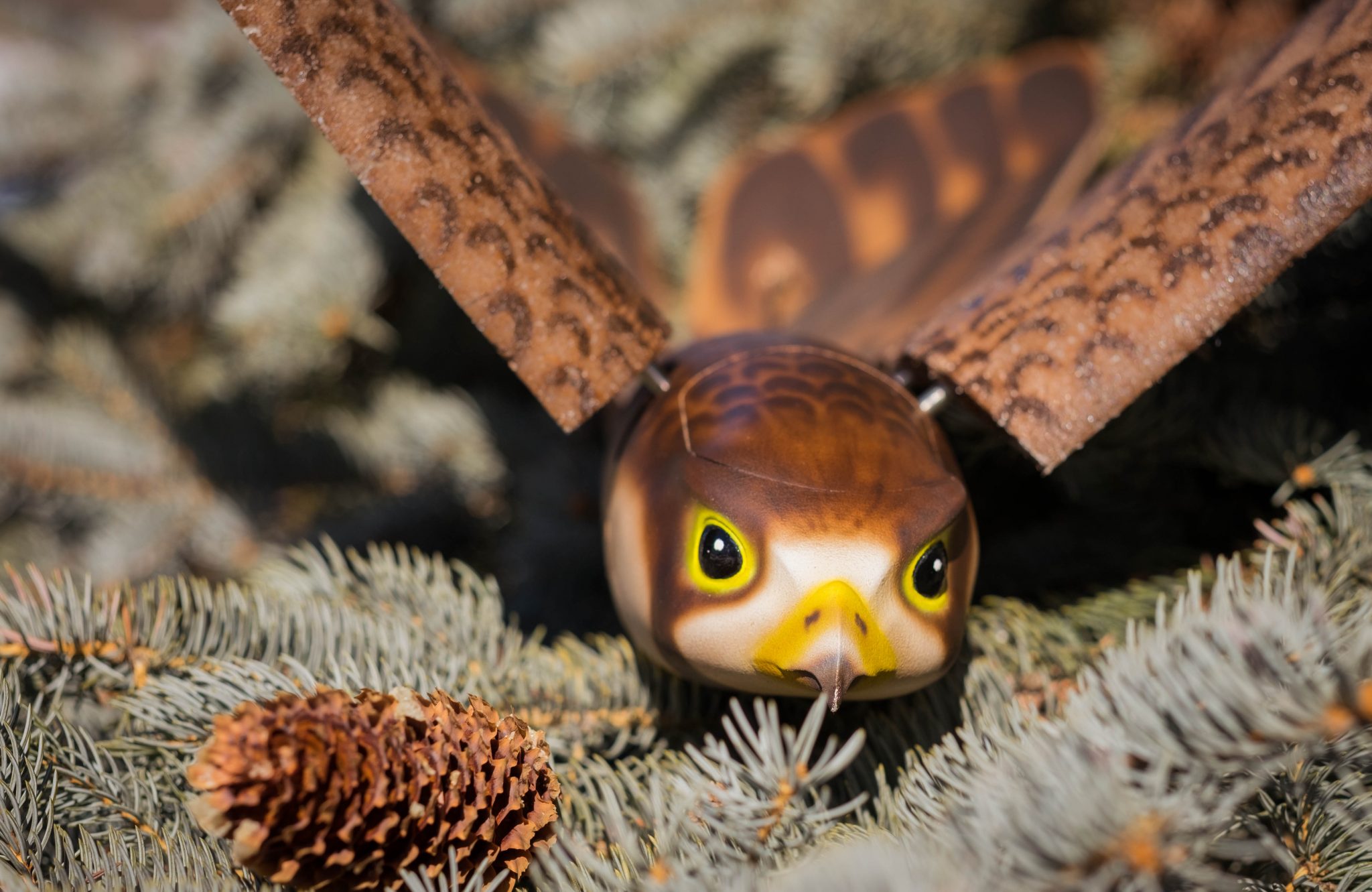 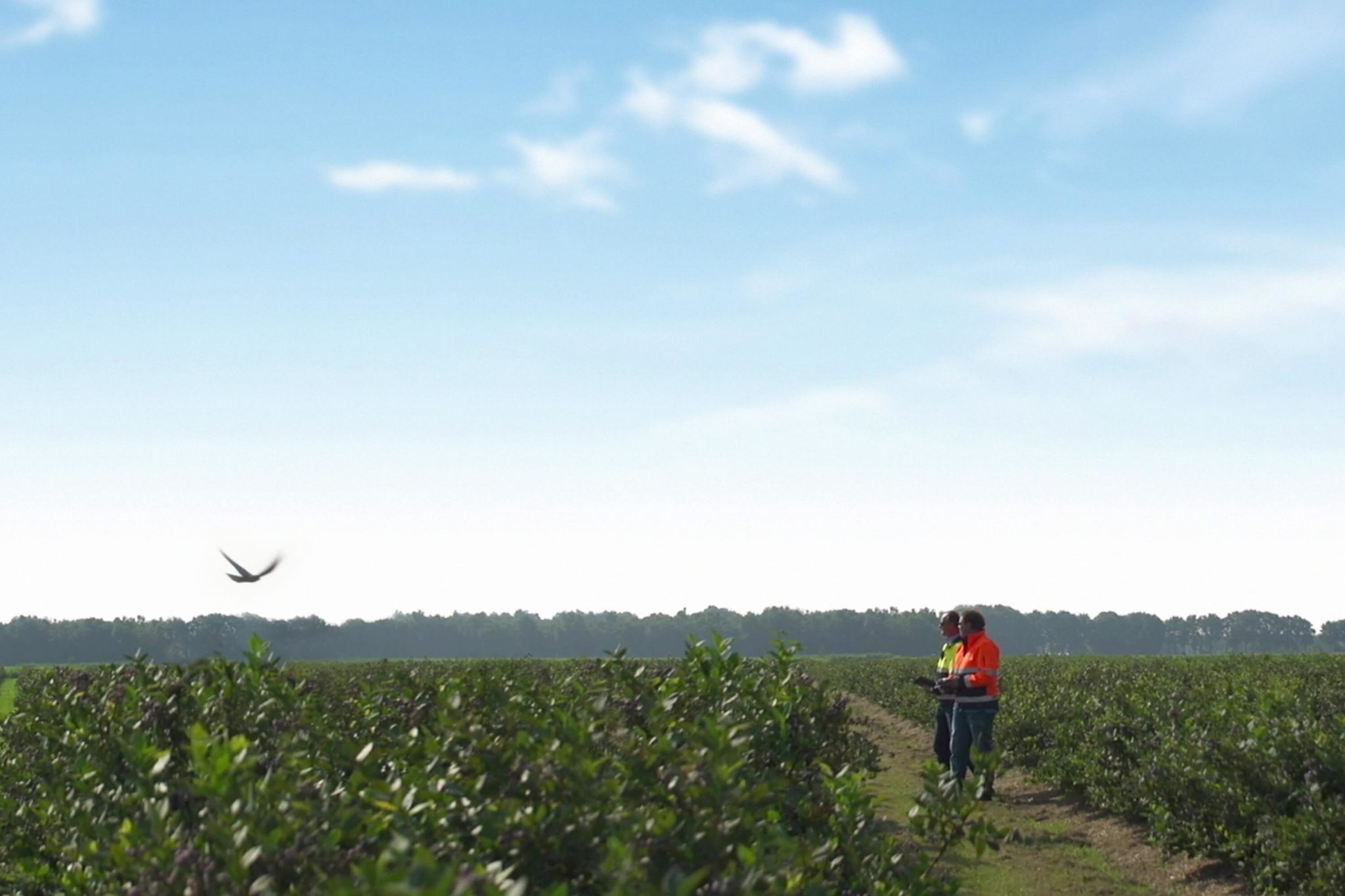 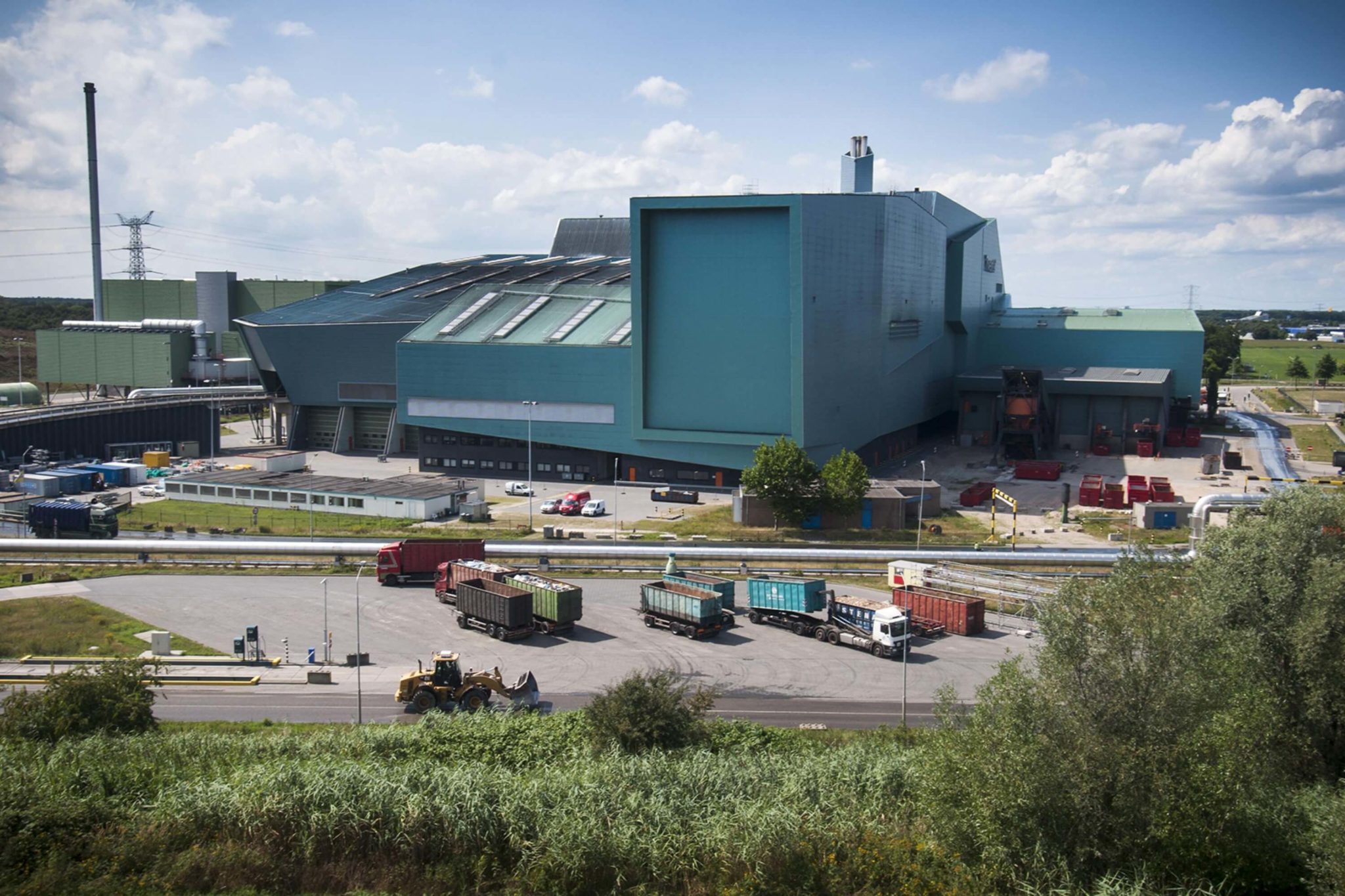 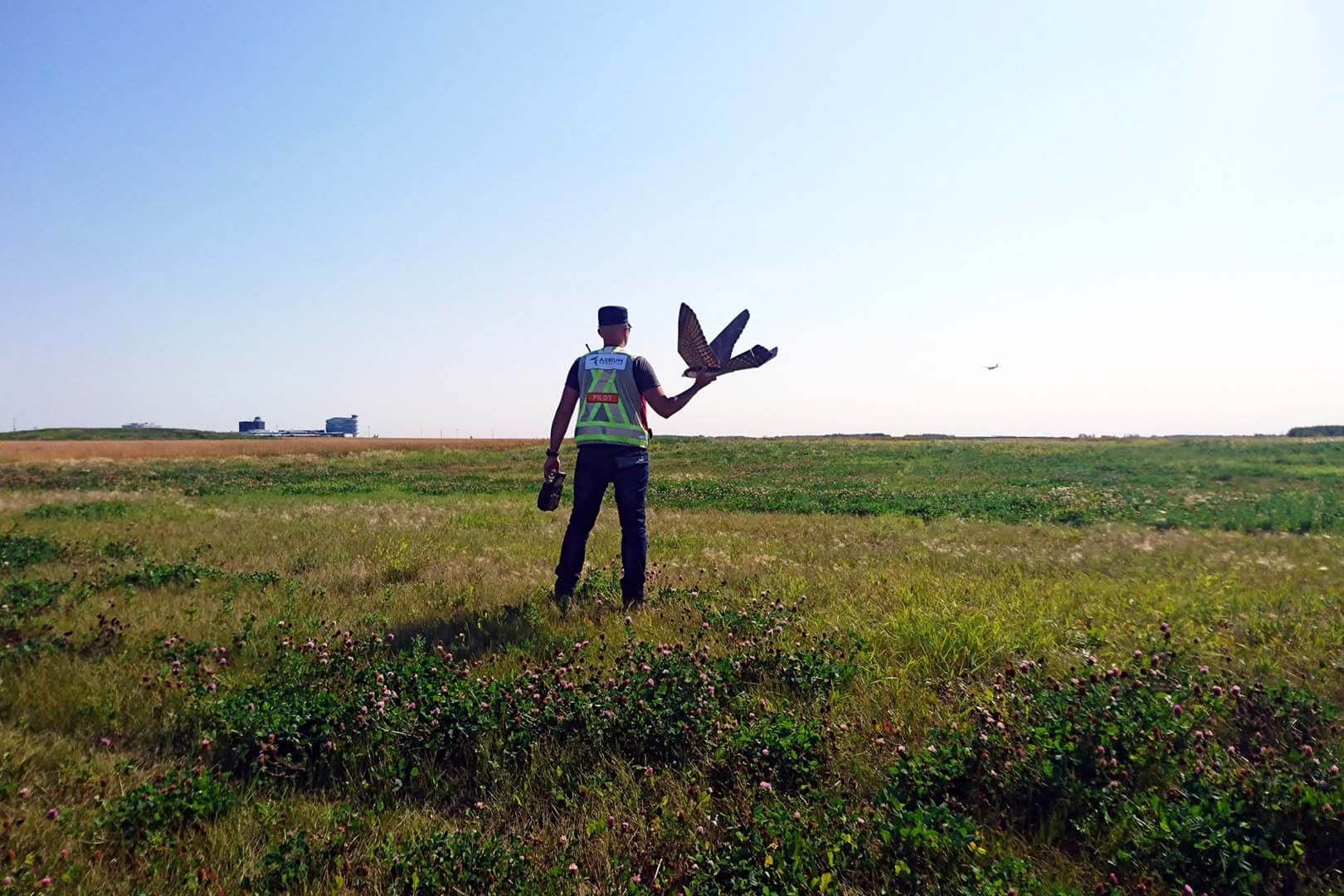